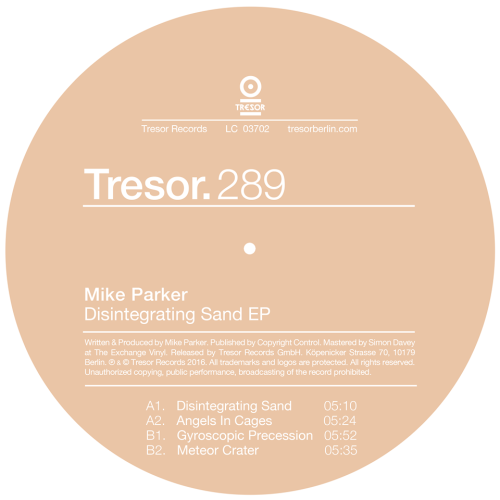 Hardware-loving Mike Parker makes his debut to Tresor Records with Disintegrating Sand EP. Parker has become known for his undulating frequencies (which is fittingly the name of one of his EPs released earlier this year), and this 4-track EP has Mike’s signature style written all over it.

With a considered sound palette consisting of a few hero elements in each track, Mike Parker has become a beacon for minimal techno. Kicking off with “Disintegrating Sand,” Mike lets his recognizable abstractions of sound and texture do the talking. Parker’s penchant for analogue sound is clear in this track; with raw oscillations cascading over a highly reverbed bassline that periodically punctuates the track.

Moving into “Angels in Cages,” the New York artist continues with the trend of oscillation and emphasises the benefit of simplicity, with his sonic trademarks of buzzing vortexes and extraterrestrial hums. The high-octave track is both driving and hypnotic.

Parker creates texture through warping bawls and a heavy percussion in “Gyroscopic Precession.” It is his ability to churn out melodies like these, that make his work so effective. Parker has been an influential figure in the electronic music scene for more than twenty years, and throughout the EP, he shows off his arsenal of unique sonic trademarks, produced and modulated with high precision. In his final track, “Meteor Crater,” Parker intensifies the heavy kicks and abrasive midrange, finding the sweet spot in his celestial reverbs.

Disintegrating Sand EP is out now on Tresor Records.